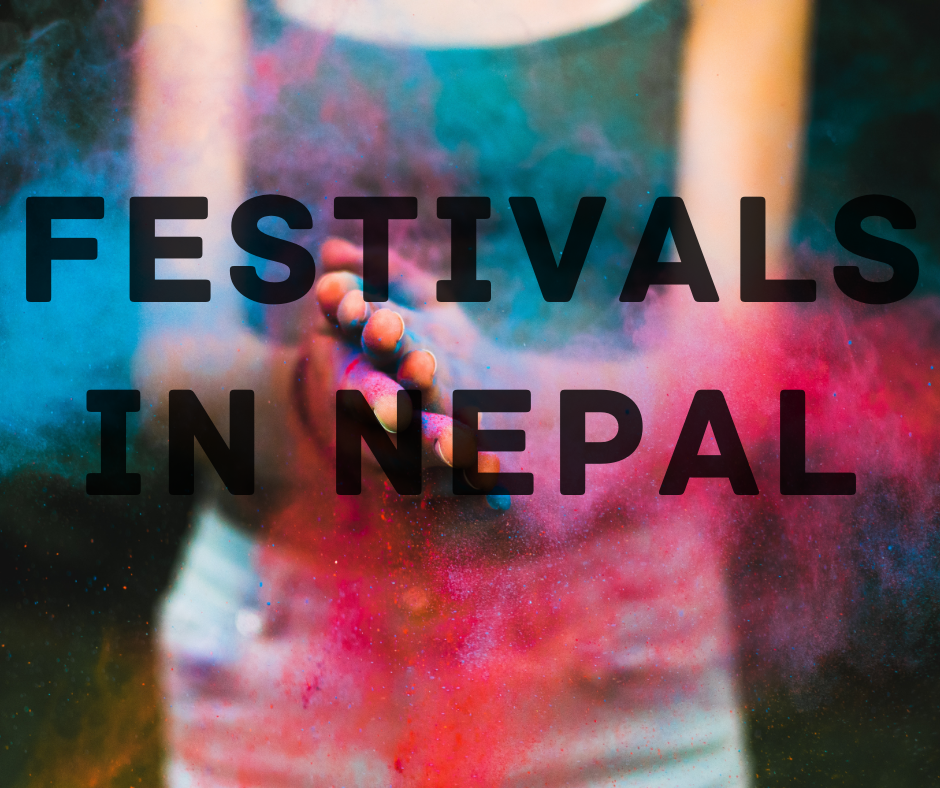 Nepal is not only famous for its high peaks but it is also known as the land of festivals. Every year more than 50 festivals celebrated in Nepal. The national festivals have fixed dates, whereas religious festivals are set by astrologers following the lunar calendar. The best part about the festivals in Nepal is that all the events are celebrated in the same way it used to be hundreds of years ago when people had no other means of entertainment.

Dashain is the main festival of Nepalese people. Every ethnic group in Nepal celebrates Dashain and it is also known as the Bijaya Dasami. It is the longest and the most favorable festival in the Nepalese annual calendar. The festival falls in September or October, it starts from the Shukla paksha of the month and ending on Purnima, the full moon. It celebrated for 10 days and the most important days are the first, seventh, eighth, ninth, and tenth. But the tenth day is very important because on this day all members of the family gather together and put tikka from an elder and take the blessing. This festival is also known for its accent on the family gathering. People return to their home from all parts of the world to celebrate together. During this time all government offices, educational institutions, and other private offices remain closed as the holiday period.

This festival of the light that comes between October/November. This festival celebrates for five days and people worship Laxmi also known as the goddess of Wealth. On this occasion, the houses are cleaned and decorated with the belief that Goddess Laxmi will enter the houses that are the cleanest and people lit candles, oil lamps, and other lights for illuminating. During the five days, animals like crows, dogs, and cows are worshipped and honored with vermilion, garland and give them delicious food for what they have done in our lives. Crows are regarded as the messenger. Dogs are the most obedient animals and guard our house whereas Cow is also a symbol of wealth in Hinduism. The festival ends with Bhai Tika bothers the day when his sister worships him for his long and healthy life to safeguard the lives of his sister.

Nepal has its official calendar that begins from the first day of the first month Baisakh. And it is referred to as “ Navavarsha” in Nepal. On this day there is also a national holiday. On this occasion, people celebrate as they wish like get-togethers with friends or family members by eating delicious foods, go for a picnic, go for different temples for worship, and other many ways.

Janai Purnima is a Hindu festival celebrated all over the country, with the gathering of a family member and feasts of Kwati. On this day, Hindu men renew their Janai and people crowding to Shiva temples in different parts of the country. On this day Shamans of the valley and around Nepal gather to perform their ancient rites in places like in Kumbeshwar in Patan, Gosaikunda in Langtang. Brahman priests tie yellow or red sacred threads around the wrists of the faithful.  Janai Purnima is also known as Gunhi Punhi in Kathmandu valley Newars and they prepare a soup of a mixture of beans called Kwati as special food for the day. Kwati is made from the sprouted beans. It celebrated on the full moon day of Shrawan.

Nag Panchami celebrated on the 5th of Shrawan to honor the battle between Nag and Garur. Garur stone image of Changu Narayan is said to sweat during the festival and priests are sent to wipe the sweat off with a handkerchief. It is also believed that Nag Panchami welcomes the other festivals in Nepal.

Krishna Janmashtami is celebrated on the birth anniversary of Lord Sri Krishna. And it is believed, Lord Sri Krishna be the 8th incarnation of Lord Vishnu in August/September. All the devotees gather in Krishna Mandir to offer their prayers, flowers, food, sweets and chant hymns too.

Ghode Jatra is also known as the Festival of Horses. This festival celebrates between the March/April and a grand horse show takes place at Tundikhel. On this day many horse events are shown by Nepal Army. Although this festival does not have many religious aspects many people from outside and inside are gathered to watch the show.

Buddha’s Jayanti celebrated every year during May in Nepal on the occasion of Buddha’s birth. On this day many people go to Swayambhunath and Boudhanath to pay respect for Buddha. And some people also visit the birthplace of Lord Buddha in Lumbini and chant prayers and burn the lamps. Lord Buddha was born as Prince Siddhartha Gautam but he left his luxurious life when he realized the misery of mankind and went in search of enlightenment.

Lhosar is known as the Tibetan New Year and Sherpas of Nepal also celebrate as New Year which falls in February. The Buddhist monasteries in the Kathmandu like Boudhanath and Swayambhunath are decorated with colorful prayer flags pulling the masses. The people perform many traditional dances and welcome New Year with feasts by gathering family, friends, and relatives wearing their traditional clothes and jewelry and exchanging gifts.

Shivaratri is one of the major festivals of Nepal. This day is dedicated to the lord of lord known as Lord Shiva or Mahadev who lived in Mount Kailash in the Himalayas. In the Hindus religion, Lord Shiva is the most worshipped God. Thousands of Hindu devotees from India and Southeast Asia gather weeks ahead of the festival and gather in and around Pashupatinath temple to pay their respect to Lord Shiva on his birthday. On this holy day, worshipper takes a dip and bathes in the holy river at early dawn and fast for the whole day and stay around a bonfire to keep the warm night as it is still winter in Nepal. The devotees also freely luxuriate in using marijuana and other intoxicating substances as these things are believed to please Lord Shiva.